A Gift of Food

My brother and his wife were recently blessed with their first baby. I think I have mentioned before that  in situations where people are in need, I feel the best thing I can do for them is bring food. So, here I go.

We're going to visit them tomorrow, and while they said it is okay for us to stay with them, I insisted that I would bring food and cook meals while we're there, so they're not trying to 'entertain' while also trying to deal with the challenges of a new baby. It's enough that they are willing to tolerate my rambunctious boys while coping with baby.

I spent today doing some make-ahead ingredients to take along, as well as making a second attempt at crabapple jelly. The first attempt turned out to be crabapple syrup. I'm happy to say the second try is setting up nicely. I also made a big pot of Indonesian sweet potato and cabbage soup from Moosewood's Simple Suppers. I have delivered this to other families during major life events and it has always garnered rave reviews. It's also super healthy, vegan, and easy to throw together.

Then came a brief interlude involving an appointment with our financial planners, dinner at Thien Vietnamese Restaurant (I believe I will sing the praises of Vietnamese cabbage salads very soon), and a brief shopping trip to try to find some clothes that a)fit; b)do not have stains or holes; c)are appropriate for work in an office, since I will be starting a new contract on Monday. My hubbie and kids went to River Landing to play while I shopped. I met up with them only to discover G with a bloody nose and D with a big bruise on his knee from slipping on the wet concrete. I actually worked on the water play area when it was being designed, and it's hard not to feel responsible for slick concrete...even though all I was truly responsible for was the research and writing...

But I digress. I came home, put kids to bed, and promptly started making the ingredients for other meals:
• pizza dough, enough to make grilled pizza tomorrow night, and leave some in the freezer for them to use as needed
• pancake mix (I mixed together all the dry ingredients for my famous buckwheat pancakes, and will also bring along homemade elk breakfast sausage, enough that we can leave some behind for them to cook later). We'll be serving it all topped with crabapple syrup!
• black olive tapenade to fill a Pan Bagnat, a filled sandwich that traditionally includes tuna, black olives, and vegetables. I'm going to see what everyone is in the mood for, what is in the garden, and what I can find at the farmers' market, and go from there. Definitely goat cheese and tapenade, for starters...

Hopefully we'll all eat well while we're there, it will be one less thing for my brother and sister-in-law to worry about, and we can leave them with the makings of some great future meals...
Posted by Noelle at 9:40 PM 0 comments

We've been eating a lot of hotdogs and hamburgers this summer. It goes with summer, right? I enjoy it, in small doses, but the doses have been getting a little heavy handed this year.

Enter planning for my kids' birthday party (they were born six days apart, two years apart, so this year I decided to host one party for both of them while they're still at an age where they don't care). I didn't want to do the obvious and serve hot dogs or hamburgers. In fact, I didn't even feel the need to fire up the grill. We would eat outside, but I'd opt for fun finger foods that would fit the realities and informality of a toddlers' birthday. No one can get the kids to sit down and eat, so why not just set out stuff they can grab when they're so inclined?

Fruit plates (watermelon, peaches and grapes)
Vegetables and fresh herb dip (I will soon write some more about my love affair with herbs)
Tortilla cheese rolls (mix 1/2 c. each sour cream, shredded cheddar and cream cheese, add your choice of flavours (I used red bell pepper, an green olive and caper mix and black olives), mix well and spread onto tortillas. Roll up the tortillas, refrigerate overnight, then slice into 1" slices and serve)
Edamame
Parmesan puffs with marinara for dipping (these were supposed to be like little gougeres, but they didn't puff properly. I won't pass on the recipe until I figure out what went wrong...but they still tasted good)
Devilled eggs with radish leaf pesto
Perogies
Sweet and sour meatballs in a apricot/hoisin glaze (just make your favourite meatball recipe, bake off the meatballs, and stir together 1/2 c. apricot preserves and 1/4 c. each hoisin sauce and rice vinegar. Throw in some sweet red pepper and the meatballs, stir, heat and serve.)

And the piece de resistance: an Iron Man Cake and Incredible Hulk Cupcakes, frosted with Swiss meringue buttercream frosting, a la Martha Stewart (my hubbie, upon eating his third piece of cake, announced, "I never have to eat any other kind of icing again, ever." Buttercream is the way to go.

I tried to go the natural food colouring route, but gave up on the red and blue. They just didn't do what I needed them to do. Even the Nutty Club stuff will only turn icing pink, rather than red. D laughed when he saw the cake, "Iron Man is pink!" I explained that it's hard to get a true red using the food colouring I have, and he added, "It's okay, Mom. The yellow is perfect."

I may have to give in and go for some of the gel paste food colouring next year. I figure, heck, my kids eat healthy 99% of the time. Is it really so terrible if we ingest food colouring once a year if it means the cake looks AWESOME? 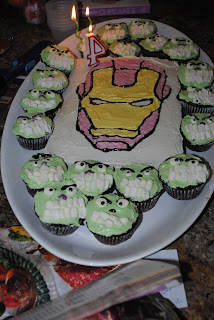 We spent Sunday recovering from the party, and sorting through toys to make room for the new ones. Next cooking project: bringing food gifts to my brother and sister-in-law and their new baby.