For someone who is not keen some of North America's classic family dishes (chili, chicken soup, stew), I've been coming to rely on them more and more. They're not my favourites, but they are my husband's favourites, and it appears that, to some extent, my boys have inherited their dad's preferences in this department.

So I make stew from time to time. And I've done it enough that I've stopped using a recipe and have started to play with it a bit. Last year I went on and on about my discovery that if you mix equal parts solid butter and flour and add that to your stew at the end of cooking, instead of flouring the meat and browning, you end up with a silky, gorgeous texture and less mess. I was prepared to do that today, but I ended up not needing to thicken it at all. The texture was already perfect. I still like to brown the meat because that crust makes a difference to the colour of the stew, and the layers of texture at the end, but believe me, as I was browning it and watching with dismay at the splatters of oil all over my very recently cleaned cooktop, I wondered whether it was worth it.

This time around, even though it made a few more dishes (not something I shy from, unfortunately), I tested whether it would be worth it to roast some of the vegetables that I added. So I cooked some of the veggies (onion, garlic, carrots, celery) with the meat, and then roasted potatoes and parsnips in olive oil, garlic and fresh herbs (rosemary, lemon thyme and marjoram). I wasn't entirely convinced it was worth it until I got a mouthful of sauce that was spiked with roasted garlic (Oh. YEAH. That was awesome!)

My other discovery was a recipe that recommended serving the stew with steak sauce, horseradish or Dijon mustard. Dijon mustard on stew is my new favourite thing. It was so good that I kept refilling my bowl, even after I was full, just as an excuse to keep tasting the mustard/stew combo. D went for it, too.  He tucked into his bowl and demolished it, and then decided to try more meat and potatoes with the mustard.

So here is my recipe, for anyone who is interested:

Season the meat a few minutes before cooking with salt and smoked pepper, if you have it. Heat the oil in a large Dutch oven until hot, and add the meat in batches, so that it has room to sear rather than steam (I find the trick to this is to find something else to do while the meat is browning. You might think you need to watch it with the heat on high, but in my experience, I'm more likely to worry it and stir too often. Go wipe the table, chop some vegetables, or whatever you need to do, while the meat gets a nice dark crust on the outside. Then stir, and let it sit again. This may also have to do with my cast iron enamel Dutch oven, which is slow to heat. I wouldn't recommend walking away from a thin metal pan on high heat, but a heavy pot will take a while to really burn something). Keep browning the meat in batches until it's finished. Remove the meat as it is browned, and reserve.

Add the vegetables all at once along with the rosemary, with a little bit of butter and some more salt and pepper. Sauté the vegetables until the onions are clear, then add the meat and juices back into the pan. Add the red wine and cook down until it's almost evaporated, then stir in the tomato juice and stock and bring to a boil. Cover and simmer on low heat for 2 or 3 hours, stirring occasionally.

About an hour before serving preheat oven to 375F. Toss the potatoes and parsnips (or other root veggies) with olive oil, herbs, garlic and salt and pepper, and roast for 45 minutes, stirring occasionally, until browned and toasted all over. Then dump the whole tray into the stew. Stir together along with 2 or 3 tablespoons of butter, taste for seasoning, finish with the parsley, and ladle into bowls. Spread mustard over everything as you eat, and discover that you are actually grateful for the oncoming winter, so that you can eat more meals like this.

While I was digging

My new favourite recipe is roasted tomatoes. All kinds, with the large ones cut into chunks, and the small ones tossed in whole, a handful of whole garlic cloves, salt and pepper, some fresh or dried herbs and a generous glug of olive oil. Roast them in a dish of some sort (they look prettiest in some sort of pottery or stoneware), and roast them at 325F for a couple of hours, stirring occasionally. I froze the results, which can be used as is as an excellent pasta sauce, used as a base for anything requiring tomato sauce (my husband cooked quinoa in some of the sauce, and it was wonderful), or pureed and turned into soup.
Posted by Noelle at 9:34 PM 0 comments

I just got to the other side of the Canadian Thanksgiving weekend wondering which I had had more of: hours of sleep, or glasses of wine. I think it was about even. A close friend from Vancouver came to visit. When she flies to Saskatoon, and people ask her why she's going there, she answers, "For dinner," because we always eat well while she's here (and all the time, really, but I make an extra special effort while she's here).

While I didn't post any Thanksgiving plans for the benefit of my Canadian readers, there's still time for any American readers who are starting to think of their own Thanksgiving table.

Friday:
I picked up our turkey, delivered fresh from Cool Springs Ranch. A whopping 20-pounder!


Saturday:
We made a trip to the Saskatoon Farmer's Market for eggs, locally grown apples (amazing!), some kohlrabi and bread for the turkey stuffing. There was pre-cut artisan bread ready for stuffing. Perfect! Then I went home and rubbed the turkey down with kosher salt, and tucked fresh herbs under its skin, to marinate until Monday.

Saturday afternoon we entertained other friends who were here visiting family, and I canned tomatoes (my parents went on a road trip during tomato canning season, so I offered to take over the canning process in exchange for some of the finished product. This is far more labour intensive than I thought). Then I picked up my girlfriend from the airport.

That night, we headed out on the town for what I planned to be a 'traveling supper', introducing her to Saskatoon restaurants that she'd never been to. We were thwarted, however, by the tendency for many restaurants to close at 9PM. Since we didn't start until 7PM, we were turned away from the place I had hoped would be our main course (Weczeria) because we arrived at 9:15. We had to cross the river and finish our evening on 2nd Avenue instead.

Sunday:
I defied all logic and planned a dinner party in my friend's honour, the day before I hosted Thanksgiving. I'm continuing to be fascinated with Yotam Ottolenghi, and I selected recipes from his most recent book, Ottolenghi. He does such amazing things with vegetables. The menu went something like this:
Champagne cocktail featuring my newly bottled plum-basil liqueur (!!)
Buttered prawns with tomatoes and olives, with Farmers Market olive bread for dipping with a French Sauvignon Blanc
Salad with roasted beets, home pickled beets, walnuts and feta
Jerusalem artichoke and Swiss chard tart with a gorgeous Meursault
Garlic, soy and honey slow-roasted pork belly slices, maple soy Lake Diefenbaker trout, and home-cured Swiss chard kimchi and a Volcanic Hills Gewurtztraminer (collected on a recent road trip to the Okanagan)
Walnut and gorgonzola bites with honey and a Spatlese Riesling
Homemade orange flower water marshmallows

It was at the end of this meal that I realized I'd probably had one or two too many glasses of wine, and I still had to make pumpkin tartlets and bun dough for my dinner the next day. I did that, and then crawled into bed at 2:30 am, only to jump out of bed at 7am to prep the turkey the next morning.

Monday:
I had collected quite a few bottles of wine that could go with turkey, including white, pink and red options, so we were well lubricated that day, too. And the menu went like this:

It was an epic meal. The highlights for me were the cranberry-sour cherry sauce, and the maple-roasted acorn squash. The Brussels sprouts and pumpkin tartlets disappeared most quickly. We've been enjoying leftovers the last few days, and turned the last of the turkey and veggies into turkey vegetable soup last night. 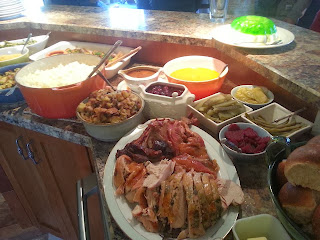 While I may be suffering from exhaustion and mild burnout from the weekend, it was lovely. Now that Thanksgiving's over, I can get back to dealing with fast-ripening tomatoes. More on that soon.