D's preschool is having a Halloween party, and parents are asked to bring something to contribute to the snack table. Last year, I brought Martha Stewart's Goblin Flatbreads. My kids liked them, but they weren't popular with the group, because no one knew what they were.

This year, I'm still going savoury, but hopefully a little more recognizable. I've opted for pumpkin-shaped cheese crackers, based on a recipe from King Arthur Whole Grain Baking Cookbook. It's their wholegrain version of homemade cheese nips, which I adapted using the flour I had (how I ended up with every kind of flour under the sun except the barley flour called for, I do not know. Well, actually, I do know—from making a few batches of the Graham cracker recipe from the same cookbook.)

These aren't the healthiest things ever—they do contain processed cheese powder, something which has not crossed my threshold, either in the form of a box of macaroni and cheese or otherwise, until today. But the cheese crackers are good enough that I will probably make them again. And I wouldn't turn up my nose at some of that cheese powder on my popcorn, either.

So here are my cute little pumpkins, which turned out to be quite soft due to the oat flour I used in place of the barley flour. But they have a nice flakiness to them, kind of like a tender, cheesy pie crust. I don't think the kids will complain. Next time, though, I will have the barley flour on hand to make them 'right'. They're easy enough to make, using a food processor, that I may consider replacing the ubiquitous Goldfish (or the organic version: Cheddar Bunnies) with the occasional batch of these. 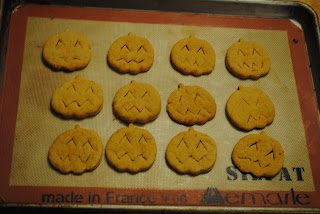 After the fact, I wondered about a cracker recipe that used real cheese, which of course would have been easy to find if I'd just Googled it. Guilty Kitchen posted one last year. Maybe THAT's the one I should try, instead of the one that uses barley flour and cheese powder. Ah well, there are many more years of cheese crackers in my future, so I'm sure I can try both and get back to you on which one I prefer.

Mix together dry ingredients in the bowl of a food processor. Add butter and blend until the mixture is a fine meal. Add the buttermilk and mix until the dough comes together. Turn the dough onto a floured board and knead lightly for a minute or two, incorporating extra flour if the dough is sticky. Pat the dough into two flat rounds, wrap in plastic and chill for 30 minutes.

Remove the dough from the fridge and roll it as thin as possible. Cut it into pumpkin shapes using a cutter, collecting scraps and rerolling as necessary. Make faces on your pumpkins using a knife.