The Joys of Roasted Tomatoes

First and foremost I must apologize for my lengthy absence. September and most of October have been a mad rush of working out of town every week and juggling events and travel on almost every weekend. In September my husband turned 40 and I hosted the party (and was so busy I had to hire Caffe Sola to cater...although I did bake the cake(s)), we took a road trip to Calgary, I went on a girls' getaway to Portland, OR, we spent a weekend at Elk Ridge Resort in northern Saskatchewan while my husband was at a conference, and I also worked a weekend evening at the Premier wine festival. D started preschool three days a week, and I started playing volleyball on two teams in a Sunday league.

In October, it has been slightly more quiet, except for my dad's 60th birthday party, which my parents hosted and combined with their 40th wedding anniversary celebration. This involved 200 guests, and the roasting of a whole pig and 3 barons of beef. I was again in charge of the cake; I made a three-tier puffed wheat cake, with Rice Krispie 'frosting'. My dad doesn't like real cake, but he loves puffed wheat cake, and this is the third celebratory puffed wheat cake I've made. The other two were wedding cakes. Thanks to my girlfriend who forwarded this photo of her puffed wheat wedding cake after I mentioned I didn't have one. 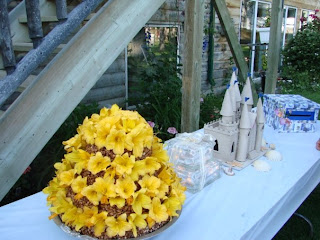 I travelled slightly less often, but my days were filled with the frantic efforts to harvest the last of my garden. I got all the basil processed and gave the rest away, and froze and dried herbs late into the night in late September. And then the frosts came, and whatever didn't get done was beyond saving. The garden is (mostly) put to bed, and probably as much as it is going to be, considering there is now snow on the ground. I had intended to dig some Jerusalem artichokes, but haven't got to them yet. They may have to wait until spring.

All that I have left of the summer bounty are the bags of root vegetables harvested from our garden, my mom's garden, or purchased from the Farmer's market, as well as a big box of spaghetti squash. And then there are the tomatoes. My tomato plants didn't yield much this year, but I did get a bumper crop of cherry tomatoes. My neighbours have been keeping me in big beautiful Beefsteaks and Golden Boys, and my mom passed on a bag of Romas.

What does one make with so many tomatoes and so little time? My new favourite recipe is roasted tomatoes. All kinds, with the large ones cut into chunks, and the small ones tossed in whole, a handful of whole garlic cloves, salt and pepper, some fresh or dried herbs and a generous glug of olive oil. Roast them in a dish of some sort (they look prettiest in some sort of pottery or stoneware), and roast them at 325F for a couple of hours, stirring occasionally. I froze the results, which can be used as is as an excellent pasta sauce, used as a base for anything requiring tomato sauce (my husband cooked quinoa in some of the sauce, and it was wonderful), or pureed and turned into soup.

It was also the easiest option for the days when the tomatoes needed attention and I had no time to give it. Simply chop, toss, throw in the oven, and ignore while doing other things. Perfect!

I was also committed to making roasted salsas, which are my absolute favourites. In fact, I don't make simmered salsas at all. There are a few steps to a roasted salsa, and it requires a few cookie sheets and a blender, as well as some wrestling with chiles (I always forget to put on gloves and suffer an evening or two of burning fingers as the chile oil permeates my skin), but the final results are so superior that I never begrudge the effort.

Here are two of my favourite recipes, both from Rick Bayless's Salsas that Cook:
Roasted Poblano-Tomato Salsa
Chipotle-Cascabel Salsa with Roasted Tomatoes and Tomatillos
When a good friend of mine tasted the chipotle-cascabel salsa, he told me I should quit my job and just start cooking. I didn't think I should quit my job just because I could follow a recipe, but I do agree that this is about the best tasting (albeit quite spicy) salsa I have ever tasted. It is tangy, smoky, spicy and savoury all at once. It is also too hot for my kids to eat, or at least I thought so. D is up for the challenge, and if we warn him it's spicy, he keeps a glass of milk close by to cool the burn (I'm glad he's trying it. Gives me hope that one day, they'll like hot stuff as much as we do!). Even the roasted poblano salsa, while mild by almost anyone's standards, is a bit on the hot side for my kids.

Which is probably one of the reasons I haven't made them in a couple of years, besides the issue of renovating my kitchen last year, and having a brand new baby the year before that. But now, I'm back, and I am delighted to have three kinds of salsa in my freezer, ready for the winter.

While I was at the salsa making, I may have lost my mind a little bit because when the recipe called for tomato puree, I decided to make my own. It came out tasting quite a bit like ketchup, and the little bit that I had left over also went into the freezer.

While I'm a huge fan of the roasting technique, and will finish up this post with my new favourite pasta sauce recipe, I did make a bit of simmered tomato sauce, mostly because I had leeks, and my favourite basic sauce for freezing calls for them. I now have some regular red tomato sauce and a couple of containers of pure yellow tomato sauce ready for pulling out of the freezer whenever we need it over the winter. It is a fairly simple recipe, and I've been referencing it in The Occasional Vegetarian for over 10 years.

3 lbs. fresh tomatoes, peeled and seeded (to peel, heat a pot of water to a boil. Drop whole tomatoes into the boiling water and leave for a minute or two. Scoop out with a slotted spoon, let cool til they can be handled, and slip off the skins. To seed, cut in half and gouge out the seed pockets. Or watch this tutorial to learn how. I don't always seed the tomatoes, because it feels wasteful. This year I did, though, because I had so many tomatoes. It does make a thicker sauce if you let them go. You could always dry them for seed!) or you can use 4 c. canned tomatoes, but I usually make a different recipe if I'm using canned.
2 T. olive oil
1 1/4 c. chopped leek (I have also used onion if I don't have leeks)
2 cloves garlic, chopped
1 t. salt
1 t. sugar
1/2 t. pepper

Heat olive oil in a large frying pan and add the leek and garlic. Saute gently for about three minutes, until soft. Add the tomatoes, salt and sugar, and bring to a boil. Simmer for about 30 minutes, or until the desired consistency is reached. Use this as a pasta sauce, add whatever herbs you like, or use it in any recipe that calls for tomato sauce. I freeze it in containers and add the necessary herbs to turn it into pasta sauce, pizza sauce, a soup ingredient, or whatever. I delight in not having to buy tomato sauce all winter.

But back to tonight's dinner, which was another experiment in roasting. And I have to say, I am IN LOVE. I only had time to do the standard roasted tomatoes, and I decided to just do that and pasta. I wondered, though, if I could add other ingredients to it, like anchovies and capers, and do a roasted Puttanesca sauce? It turns out I can, and the results were extremely satisfying.

The simmered version of the sauce is easy, too, and it is up to each individual whether they prefer the stovetop method or the oven roasted method. For me, I loved being able to stick it in the oven and walk away. I was also efficient with my oven use, since I baked a plum torte for dessert at the same time. The final result was a perfectly balanced umami sauce that blended beautifully with some rustic "Ferretto Calabro" artisan pasta. My kids asked for seconds and thirds of the meal, and we enjoyed it just as much. It's a keeper!

In a roasting pan that will hold the ingredients to about 2 inches deep (a well-packed single layer), toss tomatoes, garlic, anchovies, capers and olives. Pour olive oil over, sprinkle with pepper and toss again. Place in a 325F oven for two hours, stirring when you remember.

Cook your favourite pasta to al dente. Drain and put pasta back in the cooking pot with the sauce. Toss with the sauce until the noodles soak up the sauce and it thickens slightly. Enjoy!